This handsome little turd nibblet is one year old! Well, approximately. You see, when I adopted him from Heavenly Creatures in January of 2012, they told me he was around eight weeks old... putting his birthday around the end of November/beginning of December 2011. I decided that December first sounded like a perfect day for a purrfect kitty (get it? Cats make a purr sound! It's funny, give it a minute to sink in, you'll get it).

Since it's his birthday, I thought I'd share his story with you guys. It goes a little like this:
There is a man in St. Mary's, NL that is kind enough to feed the stray cats that hang out on his porch. One day, he looked down and noticed that there was a tiny kitten among the regulars, but the kitten didn't look well. His left eye clearly had something wrong with it. Thanks to this kind man, the kitten was picked up by Heavenly Creatures and brought to a vet. Unfortunately, Spot's (that's what they called him) eye couldn't be saved and was removed as soon as enough money was raised for the surgery. My lovely friend Jessica is the founder of Heavenly Creatures, so when I read his story on her Facebook page I messaged her to see what I could do. I told her that I couldn't possibly adopt him, but that I could foster him just for the weekend so that he didn't have to stay at the vets office. As soon as I layed eyes on him I was in trouble. I fell in love right away. Boyfriend was pretty clear about the fact that no cats were being adopted, but I managed to sucker him into the fostering agreement... and then adoption. Heh heh
I named him Harvey Mad Cat, because he had too much pizazz to be a 'Spot'. Harvey, inspired by the character Harvey Dent (yes, he's named after a villain, but a villain with a good side and an evil side! I think it's perfect for him because he's gorgeous and he makes my heart beat, but he's also the most mischievous, evilest trouble maker, who breaks off bits of my sanity and eats them for breakfast), and Mad Cat because Dr. Claw knows how to name a cat! 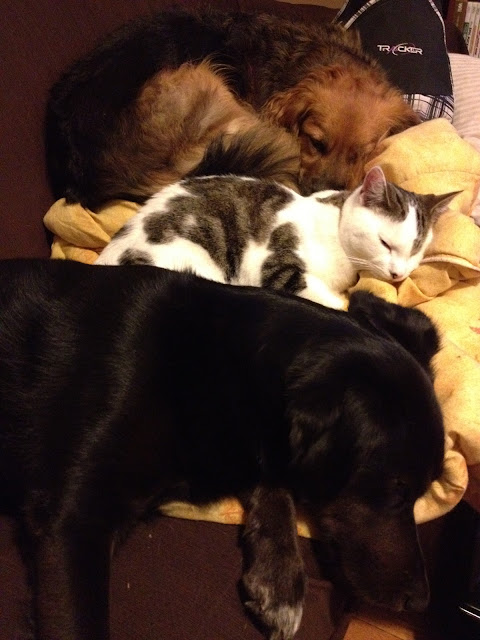 Since he's lived with us there hasn't been a dull moment. On the first day here, he found a way into the bathroom wall. He hid in the wall (behind the shower!) and the only way I could get him out was to lure him with a can of fresh tuna. He's also become my new alarm clock, waking me up when it's breakfast time (sometimes breakfast time is at three A.M, apparently).
I love my sometimes terribly behaved cat. He's really clever, cuddly, playful, and he always makes me laugh.

(he got cat nip for the first time today... he's high on life right now)