An Afternoon Drive Through The Fiery Gates 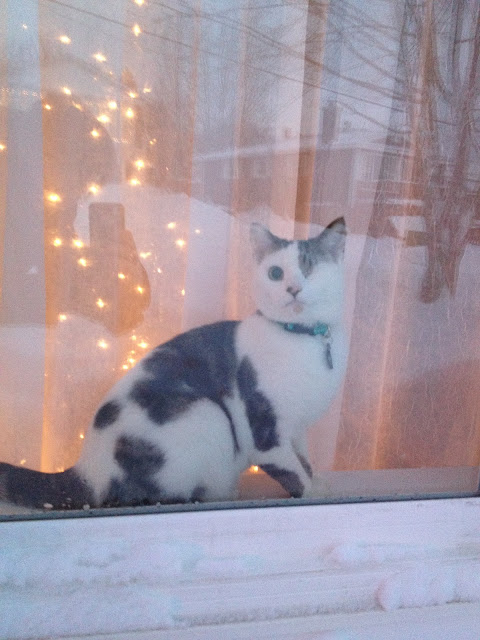 Have you ever woken up and thought "Hmm, something tells me I should close my eyes and pretend this never happened"? I have. It happened a few mornings ago actually, when I was waking up at six a.m to start the drive back home. Why didn't I blog about this earlier? Well friends, it's called shock, and it takes time to recover from it. Also, it's pretty difficult to type when your eyes are twitching.

See the darling photo of Harvey above? It's a lie. This is not what he looked like that day. He only has one eye, but when it wasn't filled with disdain for putting him in a moving vehicle, it was filled with a fiery and urgent look of complete insanity. As I drove away from the peace and safety of my mom's house (with Oz and Harvey in the back seat), I already had a sweaty brow and an understanding of why people smoke cigarettes.

Let me explain something. Boyfriend's home town is about fifteen minutes away from mine (in car). It took me thrity-five minutes to get there.

I first had to stop two minutes after leaving the house because Harvey had crawled up onto my head - I was having a hard time seeing cleary with  my scalp being slowly removed. The second stop was about ten minutes after that, when Harvey started yowling (usually a sure sign that a brown crime is about to occur). The third and final stop before finally picking up Boyfriend was five minutes later, when Harvey managed to remove him harness and jump onto the dashboard (in front of my eyeballs).

I pulled into Pasadena as a much older woman, having aged at least twenty years on my short drive. I don't drink, but if someone had offered me something when I arrived, I might have taken it.

Apparently the only way that Harvey can travel is in my arms. For the next seven hours, I sat (pretzel legged) with Harvey nestled into my chest and belly. I would have been mad if he hadn't been so clearly scared, and now so relieved to be safe in my arms. Good thing he's a momma's boy. Looking back it feels nice to know that he's so comfortable with me that he can put aside his fear as long as I hold him, but at the time all I wanted was to cry while singing some Celine Dion. Mental break, perhaps?
Hope everyone else had a lovely traveling experience over the holidays!