My Views On Love And Guys Who Ruin My Nachos 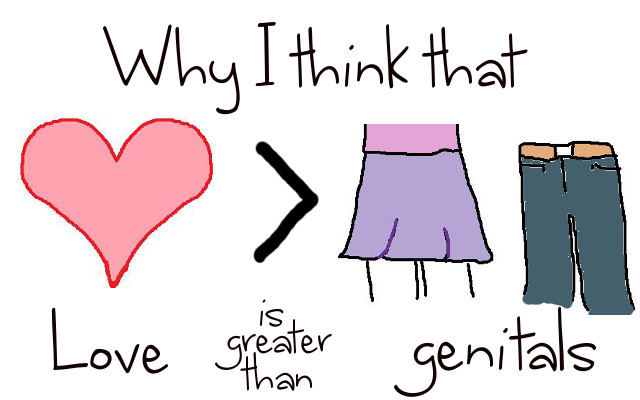 I've been reading a lot of blogs lately, and one thing that they almost all have in common is this piece of advice: if you want more readers, try to keep politics out of your personal blog.

Last night, Boyfriend and I went out to get nachos at a restaurant. The entire time we were there, there was a man talking very loudly about drugs, sex and whatever else he could think of. Normally I can zone out anyone interrupting me while eating delicious snacks, but this guy was so vulgar that I couldn't even enjoy my cheesy indulgence. He was sullying my nachos!

One of the words he used a bunch was the word 'fag'. I'm a big believer in words having different meanings based on the person and context that they are coming out of, but this guy was using it in a really mean spirited way. It was pretty clear that, coming from him, the word 'fag' was a term used to insult and berate gay men. Now, this man was touching on pretty much every subject under the sun, but this one stood out to me, so I want to toss in my two cents here.

I'm going to flat out say that homosexuality is not a choice, friends. Take a second and think about this, what person would CHOOSE something that pretty much guarantees them a punch in the face (or worse) from a large number of the world's population? Also, if it's a choice, why would some people be scared to tell anyone? This is my opinion. I know that there are a lot of arguments against this, and I know that I might be dropping some serious turds on those of you out there who don't agree with me, but you don't have to continue reading if you don't want to, and you are welcome to contact me with your opinions. I love hearing different opinions, but I don't like hate speach or rudeness, so I'll ignore stuff like that.

Why should be all stop worrying about homosexuality? Why I thought you'd never ask!

Consensual people who buy eachother presents, watch movies together and have sexy cuddles aren't very threatening. The world can be a dark place; there are crazier things going on that require our focus. We can worry about these people when the friction from their sexy time causes world wide earthquakes. If this happens, I'll totally be the first person in line to say "stop that!".

You don't have to associate with anyone that you don't like. Don't be friends with someone if you don't agree with their lifestyle. It should go without saying that if you don't respect someone, you won't make good friends anyway. Problem solved.

This rant could go on, but the moral of this story is that I don't think about genitals. It's true. I pretty much never envision those parts in my brain, so when I see a couple that looks happy and in love, I think "Oh, how nice.". I judge people on their personalities. Some people are great big jerks, others are super great, and some people are in between. No matter where you entangle your junk, if you're jerk, you're a jerk; if you're nice, you're nice. Dance naked with someone who loves you, and who you love right back! If we all focused on our own dancing instead of other peoples, I doubt there would be much time to hate others, since we'd all be sleepy and want to cuddle.

Also, have deeply opinionated conversations in meetings with like minded people, or at a lower volume. You never know what a hungry girl might do if you interrupt her feasting...